An important aspect of classical Vedic traditions is disciplic succession of teacher and student known as parampara. Valid knowledge of the Absolute is only possible through the teachings of a qualified teacher (guru) transmitted to the student (disciple). Formal initiation of a student (diksha) into his teacher’s lineage occurs through a ceremony,  including the passing down of a mantra. An authentic line of disciplic succession is unbroken and thus one can trace the lineage of a particular school’s teaching to its original source.

There are several different schools of thought within the Vedanta philosophical system, one of which is the Gaudiya line founded by Chaitanya Mahaprabhu in Bengal at the onset of the 16th century. The Gaudiya parampara is believed to begin with the first living being—Brahma. The parampara includes Madhvacharya—the great Vaishnava saint of the 13th century and is therefore known as the Brahma-Madhva-Gaudiya tradition (sampradaya). Chaitanya Mahaprabhu followed in this disciplic succession though he is believed by his followers to be an avatara of the Supreme Lord himself. 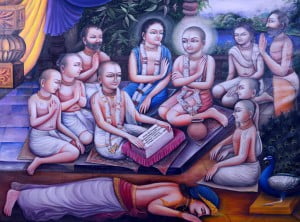 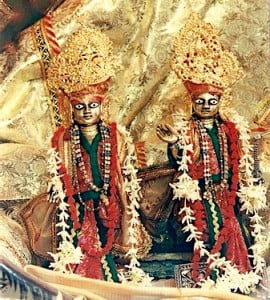 Today, there are many branches coming from Gadadhara Pandit, known as Gadadhara Parivar. One of the most eminent saints and scholars in this line is Sri Haridas Shastri Maharaja of Vrindavan, who left this world on October 6th, 2013 to enter into Sri Sri Radha Krishna’s eternal lila. In addition to having been a renounced monk, renowned teacher, and protector of cows, Sri Haridas Shastri Maharaja has translated and published over eighty books from Sanskrit into Hindi and Bengali, many with original commentary. He was the first person to translate and comment on Jiva Gosvami’s Sat Sandarbhas into Hindi. Sri Haridas Shastri Maharaja held nine graduate degrees and three postgraduate degrees in the six systems of Hindu philosophy.

The Jiva Institute of Vaishnava Studies was founded with the direction and support of Sri Haridas Shastri Maharaj by his disciple and renowned teacher and scholar, Dr. Satyanarayana Dasa Babaji.