In 2012 I experimented with something I had been deliberating on for many years. Along with twelve of my students, I rented a house in Switzerland for a week in the summer and engaged in japa meditation as described in bhakti shastra. There was no contact with the outside world, (i.e. no phone or internet) and we cooked our own food. The results were very encouraging. This year we came together for two weeks, practicing japa mediation the first week and studying bhakti shastra the second. There were thirty of us and everybody felt some change in their awareness. (Read full article here.) 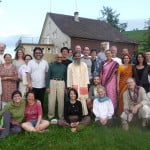 However, it was a little difficult for beginners to engage in japa or listen to bhakti shastra for an entire day. Based on this experience I have decided to create different levels for these svadhyaya retreats. The term svadhyaya (lit. self-study or introspection) means both the study of shastra and the chanting of mantra. I refer to it as a “treat” instead of a “retreat” (lit. to withdraw) because the word “treat” implies an activity which brings pleasure. Indeed, it is pleasurable, as well as a treat for the mind, intellect and heart.  It is also a treatment for the mind and heart in the form of a “treat”.

The Indian schools of thought are called darshana. The word darshana is often translated as “philosophy”, but this translation does not covey the meaning sufficiently. Darshana means vision — vision of reality, a way of seeing reality. It is also a map of the path one walks to have a vision of reality. The purpose of a darshana is not just to give some theoretical or vague understanding about reality but to actually have an intuitive insight of it. Therefore every darshana consists of a theoretical part (epistemological and ontological) and a corresponding practice (sadhana) for having the darshana (experiencing) the reality it describes.

It is of utmost importance to have a clear understanding of the darshana of one’s school so that one takes the right step to reach the destination. For even if you have a great car running perfectly, are a trained driver, driving on a nice highway and are alert, you will still end up in the wrong place if you have taken a wrong turn. Alternatively, even if you are walking leisurely on a dirt road you will reach your goal sooner or later, so long as you are walking in the right direction. Every step you take brings you closer to the destination. Thus proper understanding of Reality is necessary for a sincere and serious seeker.

Spirituality is the path of enlightenment. One must have a clear picture of the path as well as the goal to be successful. As it is said in Maitrayani Upanisad (6.22), “One who is learned in shastra (sabda-brahma) attains the Supreme Reality (para-brahma)”. A practice which is not based on and not aligned with the proper meaning of shastra will not yield the desired result:

“Casting aside the ordinances of scriptures, one who acts whimsically, attains neither perfection, happiness, nor the supreme goal.”

“Therefore, only scripture is your authority in ascertaining what should be done and what should be avoided. You should perform action in this world only after knowing the injunctions of the scriptures.” (Bhagavad Gita 16.23,24)

Some sadhakas argue that scriptural knowledge is jnana and has nothing to do with bhakti. This is a gross misconception. The word jnana (lit. knowledge) has various meanings. Besides its literal and general meaning, this term is also used for one of the three main paths of yoga, i.e. karma yoga, jnana yoga and bhakti yoga. When used with reference to jnana yoga it means the awareness of one’s absolute identity with Brahman. Such a jnana is not conducive to bhakti at all and is denounced by devotees. But the word jnana is also used for knowledge related to any topic or object. Therefore, jnana related to bhakti is not same as the jnana of jnana marga. Otherwise Jiva Gosvami and other acaryas would not have labored to write volumes upon volumes of literature.  They wrote these books to explain the process and goal of bhakti. They did not write them to earn money. There were no printing presses in those days and no book shops. These acaryas certainly were not confused about the difference between bhakti and jnana. 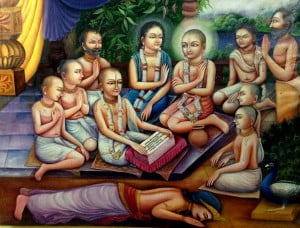 Jnana or knowledge related to bhakti is also part of bhakti. In fact hearing, which includes studying shastra, is the first limb of bhakti. Therefore, study of bhakti shastra should not be mistaken as the jnana of jnana yoga. Even Lord Chaitanya Mahaprabhu used to hear the explanation of Srimad Bhagavatam from Sri Gadadhara Pandita while residing in Puri.

Then there are others who opine that there is no need to study shastra because bhakti, such as chanting Mahamantra, itself will reveal everything. Two questions arise here. The first is: how do they know this? Either they know it from shastra or from somewhere else. If they know it from shastra then first of all they accept the importance of shastric knowledge and concur with us. Secondly, does shastra teach only this much? Certainly not. So why should they neglect to study the rest? Does shastra instruct them only to read this part and forbid to study the rest? That is certainly not the case. Therefore, since they accept the authority of shastra, they must study it, otherwise they are implicated in namaparadha. However, if their opinion that bhakti will reveal everything and thus there is no need to study is not based on shastra, then it is not authentic and should be rejected.

The second question is: Without studying shastra how do they know what bhakti is and how to execute it properly? Bhakti is not a material activity and thus knowledge of it cannot come about by any material means. Authentic knowledge about bhakti can be known only from shastra. Therefore, there is a great need to study the bhakti shastra. 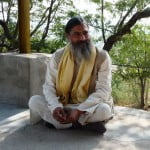 Millions of people practice the path of bhakti, yet only few seem to achieve their desired goal or reach close to it — even after decades of practice. I may be wrong and will be very happy if proven so, but my experience says otherwise. If a serious businessman is not successful or an athlete is failing to achieve his desired goal, then that individual will ponder over the cause and look to correct himself. He will consult an expert or a coach in his field. In fact, were we such an unsuccessful business or sports person, we would do the same thing. But in the field of spirituality we think, “Somehow I will make it. I do not need to worry much about it. Anyway, it all happens by grace and grace is causeless.” We are not even willing to use our God-given intelligence and discrimination which we so often use for material purposes.

There is no grace without a race. And a race must be run with great attention. This is the message from the pastime of Krishna being bound by Mother Yashoda after she labored hard and was sweating. Thus it behooves a sincere seeker to investigate the cause behind one’s delay in progress. The most probable reason is that one is not practicing properly. Proper practice can come only from proper understanding of the process as well as the goal. It is for this reason that our acaryas composed the bhakti shastra like the Sat Sandarbhas to make both the process and goal crystal clear.

Therefore the Svadhayaya Japa and Shastra Treats are an effort to understand and practice the path of bhakti properly and make our life successful.