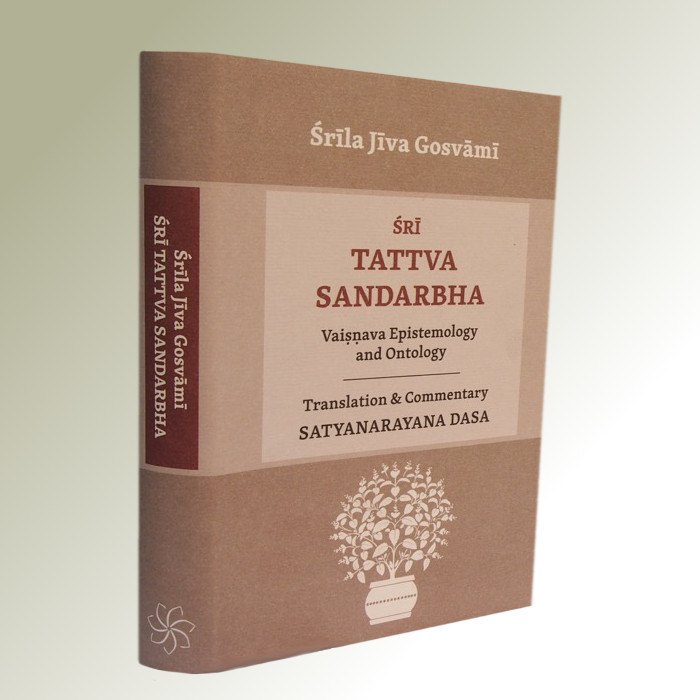 Vaisnava Epistemology and Ontology
Of the Six Sandarbhas, Tattva Sandarbha is the smallest in size, but not in importance. As its name suggests, it discusses the Reality (tattva) that is the ultimate subject to be understood and realized. Tattva also means “essence,” and thus Tattva Sandarbha provides the essence of what is to be elaborated upon in the rest of the Sandarbhas. Thus, it serves as an introduction to them.
It may be said that Tattva Sandarbha lays the foundation for entry into the subject matter of Bhāgavata Purāṇa, a detailed analysis of which follows in the rest of the Sandarbhas. It does so particularly by providing the epistemological viewing frame through which Bhagavān is directly intuited, devotionally served, and established ultimately as the supreme object of divine love.

Translation, commentary, and copyright: Satyanarayana Dasa
Satyanarayana Dasa, born in 1954, was drawn to the spiritual traditions of his home country India since his childhood. After receiving a postgraduate degree in 1978 from IIT Delhi and working in the United States for four years, he returned to India. There he studied the formal systems of Indian philosophy known as Ṣaḍ-darśana under the direct guidance of his guru Śrī Haridāsa Śāstrī Mahārāja and Swami Syama Saraṇa Maharaja.
This education was taken up in the traditional manner for more than 25 years, while he dedicated himself as a practitioner of bhakti yoga. In 1991 he accepted the traditional Vaiṣṇava order of renounced life, bābājī-veṣa. His main focus has been with the works of Śrīla Jīva Gosvāmī, particularly on translating the Ṣaṭ Sandarbhas, into English and commenting on them. He also earned four śāstric degrees, and received both a law degree and a PhD in Sanskrit from Agra University.
Satyanarayana Dasa is the director of the Jiva Institute of Vaishnava Studies in Vrindavan, India. He is a visiting professor at Rutgers, the State University of New Jersey. In 2013 he was honored by the president of India, Pranab Mukherjee, for his extraordinary contribution in presenting Vedic culture and philosophy, both nationally and internationally.

Save this product for later
Display prices in: USD